An-atta: On Self and Non-self

Form your various blogs I noted that Buddha thought [1] everything in the universe is changing except the change; [2] consciousness is nebulous and cannot be defined. Probably Buddha did not discuss the existence or non existence of God or he had a clear opinion?

Recently I read a book in Telugu authored by one Buddha Ghosha which said that Buddha believed that there is nothing like “self”? Is it correct?

Saying that there is nothing called soul which is constant is different from saying soul is self but also changes [evolves], splits [as water drop lets in a river] and recombines [as genes do] is different. What is the correct position of Buddha?

May I expect a small blog or knol on this? 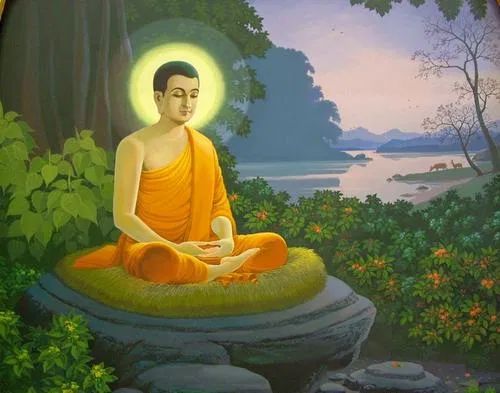 Dear Shri Sekhar, That is a tough one; and is a much debated one too. I am neither qualified nor I claim to have the right answers. Let me try.

1.1. The subject you mentioned refers to the Buddhist concept of Anatta (an-atman or an-atmavada) meaning the doctrine of no-permanent soul. The Buddhist tradition believes that the root of all  suffering is in regarding the “self” as a permanent or a static entity or as an unchanging essence; and clinging to it.

Please recall the five aggregates or the skandas that I mentioned in my post Consciousness- a Buddhist view. None of the skandas or all of it is construed as one’s self.

1.2. The Buddha did not deny existence of feelings, thoughts, sensations or whatever; but, he did not also talk about a permanent conscious substance that experiences all these. According to him, the streams of consciousness ever changing, arise and perish leaving behind no permanent “thinker”.In other words, it seems to suggest that there is no “self” apart from the process.

2.1. However, it must be mentioned that Buddhism does not deny a soul altogether. The Buddhist view is that the belief in a changeless “I-entity” (soul) is the result of incorrect interpretation of one’s experiences. It seems to me that in the Buddhist view, self/soul is not perceived as a permanent  entity, or a static substance, or as an essence, but it is understood as a dynamic process which one experiences as perceptions, ideas or desires. It says; self is wrongly taken as a fixed, enduring entity. Because, according to Buddhism, there is not anything which is enduring, fixed, and eternal. Everything is interdependent and changing. Everything is in constant flux and has no astitva or existence outside of shifting contexts. As Abhidhamma kosa explains that there is no soul apart from feeling, ideas, volitions, etc “There is no self separate from a non-self”.

2.3. Thus, it appears to me, translating the Buddhist concept of an-atma or anatta as ‘no soul’ or ‘self does not exist at all ‘is rather misleading. An-atta, I reckon, means ‘self is not an enduring entity or eternal essence’.

3.1. The Buddha is often blamed for maintaining silence on the key question of a permanent self. But, in fact, the Buddha did explain  why he chose not to give out a partial answer of either  ‘yes’ or ‘no’. The Sutta Nipaata (6.400) elaborately narrates the context and the reason for the Buddha’s silence. I am mentioning its substance in a brief and a summarized form:

Vacchagotta the wanderer questions the Master “what have you to say about the existence of self (atta)?”

The Exalted One was silent.

Vacchagotta   again questioned “Is there no such thing as the self?” .

The Exalted One was silent.

At which Vacchagotta just walked out.

Soon thereafter, venerable Ananda the disciple enquires the Master why he chose to be silent.

“Ananda, if when asked   ‘Does the self exists?’ had I replied to him ‘yes, the self exists’ I would then be siding with all those Samanas and Brahmanas who regard soul as eternal and unchanging (eternalists).And, that reply  would have also been not consistent with my knowledge that all things are impermanent….”

“Had I replied; ‘no, the self does not exist ‘I would then be siding all those Samanas and Brahmanas who are annihilationist (those who view death as the annihilation of consciousness).And, that reply would have added to the bewilderment of Vacchagotta who was already bewildered. He would have exclaimed in disgruntle ‘Formerly I had a self; but now I have one no more’ …”

3.2. In case the Buddha sided with the annihilationist that would have led to denying his own concepts of kamma, rebirth, and dependent origination etc.

3.3. Thus, the Buddha rejected the two extremes concepts of ‘Permanent Self’, and ‘Annihilation’.

3.4. The an-atta doctrine, undoubtedly, is extremely difficult to comprehend. Yet, it is the Buddha’s strategy to free oneself from identities and attachments.

4.2. The Buddha was reluctant to define the indefinable which is the true self. The Upanishads too chose to describe the Truth as that which cannot be apprehended by mind. They also said (in almost the same words) the correct view is to assert ‘This is not mine; this am I not; this is not my self’.  Both the Buddha and the Upanishads refused to be attached to an identity.

To put it in another way, The Vedanta’s call of realizing ones true identity -is a philosophical view. The Buddhist interpretation of letting go all identities is an  objective prescription.

4.3. By negating identity with the conditioned skandas (in his second discourse: Anatta-lakkhana-sutta) the Buddha was pointing to the unconditioned impersonal nature of true self. That was also the view of the Upanishads.

Therefore, both the Buddha and Sri Shankara asserted that the truest test of all is one’s own experience.

5.2. The difference between the two, as I mentioned elsewhere, was that Sri Shankara described the reality from outside, as it were, because that is the only perspective from which it can be understood as One. Sri Shankara was basically a philosopher; and as all philosophers do, he looks upon the whole of reality objectively and attempts to comprehend its structure. It is as if the philosophizing intellect takes a look at the whole of existence from outside of it.

5.3. But the Buddha, the yogi, was describing his experience. He realized (just as Sri Ramana)  that one cannot get outside of reality and describe it as an object; because one is inseparable from that reality. He also believed too much philosophizing and clinging to ideas is an obstruction to enlightenment. He advocated: let go all attachments, even the attachment to ideas and concepts.

Posted by sreenivasaraos on September 28, 2012 in Buddha, Buddhism, Indian Philosophy

7 responses to “An-atta: On Self and Non-self”