RSS
← Kavi, Rishi and the Poet
A theory of Creation →

The Southern India recognizes and adores Sadashiva Brahmendra as the celebrated composer of divine kirthanas; but not many may be aware he, in his later years , was an Avadhutha, a jeevan_muktha who lonely wandered the hills and dales; ran along the river banks, naked or semi naked, in a state of divine bliss. He , unmindful of the scorching sun, pouring rain, blowing chill winds roamed in wilderness without ever uttering a word; slept under starry sky; shunned all human contact ; and, was ever in a supreme intoxicated state.

Today he is revered not merely for his musical compositions; but also for his sublime Advaita text “Atma Vidya Vilasa”,  the most favorite spiritual text of Sri Chandrasekhara Bharathi Swami the 34th Jagadguru of Sringeri Peetha. The swami , himself an Avadhuta, a week before his passing away, parted with all his meager passions; but retained, on second thought, a copy of Atma Vidya Vilasa till the day prior to his departure.

Not many facts are known about his life. It is believed Sadashiva Brahmendra lived in the time of Sharabhoji, ruler of Tanjore (1712 -1728). This is based on the oral tradition that Sadashiva Brahmendra presented a copy of his work Atma Vidya Vilasa to King Sharbhoji, when the king called on the Avadhuta to pay his respects.

His childhood name was Shivarama_krishna . He was the son of Somasundaram Avadhani, a Vedic scholar of Telugu Niyogi origin, who lived in Madurai in Tamil Nadu. It is said Shivarama’s family name was ‘Moksham’; and his mother was Parvathy. He was born in Nerur, situated by the quiet flowing Cauvery, near Karuru. He had his early education in traditional subjects under Ramabhadra Dikshitar who lived in Tiruvisai_nallur a.k.a. Shahajipuram. There the young Shivarama came under the influence of what were renowned as the triumvirate of Bhajana tradition viz.  Sridhar Venkatesha Iyer, Sri Bhodendra Sarasathi and Bashyam Gopala_krishna Sastry.

On his return, Shivarama still in his early teens was promptly married. He however, soon thereafter ran away from home never to return. He went to Tiruvisai_nallur ; and, while wandering aimlessly in the woods nearby, he met his Guru Sri Paramashivendra Sarasvati, who initiated Shivarama into sanyasa; and named him as Sadashiva_Brahmendra.

The identity of Sri Paramashivendra Saraswati is a matter of debate. Some say he may have been an Acharya of the Kanchi-peetham , guided by the suffix ”Indra Saraswathi” to his name. But; an Acharya  of that name appears in the annals  of the Kanchi tradition as the 45th Jagadguru  who presided over the Mutt for 27 years from 1061 AD , that is about seven hundred years before the time of Sadashiva Brahmendra.  The 57th(?) Jagadguru Sri Paramasivendra Saraswathi II, recognized as the author of the treatise Dahara Vidya* Prakashika , presided over the mutt from 1539 to 1586; that is about a hundred years before Sadashiva Brahmendra.

[Dahara Vidya is an ancient form of meditation on Self dwelling in the small ethereal space within the heart-Chandogya Upanishad –VIII. Sri Ramana Maharshi was a great exponent of this method.]

In any case ; Sadashiva Brahmendra considered Sri Paramashivendra Saraswati as his Guru , named him as such in all his works and composed poetic works Navamani mala , Guru_rathna_maalika and Dakshina_murthi_dhyana in tribute to the Guru.

Sadashiva was an active young man , talkative and always chirping away. On one occasion his incessant talk so annoyed his Guru  that he in despair  called out “Sadashiva..! When will you learn to be quiet?”. The disciple promptly replied, “Right now, Master”. He fell into silence and never talked again the rest of his life. He gradually withdrew from the world, introspected and plunged into intense penance. He discarded all norms of accepted behavior, wandered naked aimlessly in the hills and along the Cauvery. He looked wild and insane. When some one reported to Sri Paramashivendra that his disciple had gone insane, the Guru was delighted and exclaimed “Will I ever be so fortunate!” He realized that his disciple was now  an Avadhuta.

Sadashiva Brahmendra remained in that state; beyond body consciousness, not bound by ordinary social conventions and worldly concerns for a long period. A number of stories and myths grew around his mystical powers.

On one occasion , when he met his past associate Sridhar Venkatesha Iyer;  the later remarked that it was laudable to be a mauni in worldly matters; and, questioned what prevented him from singing the praise of the Almighty. Then, Sadashiva Brahmendra saw reason in the argument.

He thereafter created a series of musical compositions in praise of :

His poetic signature was “parama_hamsa” . About twenty-two of his compositions have been recovered.

Plese check here for a collection of compositions of Sri Sadasiva Brahmendra. and  their  MP3 links

And, for the list of known compositions of Sri Sadashiva Brahmendra– compiled by Sri P.R. Ramachander, some with translation into English

But his Atma_vidya_vilasa a true classic is the best known.

Atma_vidya_vilasa is a poetic work running into 62 verses in simple, lucid Sanskrit. Its subject is renunciation. It describes the ways of the Avadhuta, one who is beyond the pale of social norms , beyond Dharma , beyond good and evil; one who has discarded scriptures, shastras , rituals or even the disciplines prescribed for sanyasins; one who has gone beyond the bodily awareness , one who realized the Self and one immersed in the bliss of self-realization. He is absolutely free and liberated in every sense – one who “passed away from” or “shaken off” all worldly attachments and cares, and realized his identity with God. The text describes the characteristics of an Avadhuta, his state of mind, his attitude and behavior. The text undoubtedly is a product of Sadashiva Brahmendra’s experience. It is a highly revered book among the Yogis and Sadhakas.

Sadashiva Brahmendra lived in that exalted state on the banks of the Cauvery until he discarded his mortal body at its age of one hundred years or a little more, some time between 1750 and 1753. His Samadhi in Nerur, Karur district is now a shrine to a large number of devotees. His Aaradhana is celebrated annually on the tenth day of dark half of the month of Jeshta (some time during May each year).

Sadashiva Brahmendra and his classic work Atma_vidya _vilasa wielded an enormous influence on the life and Sadhana of the Sringeri Jagadgurus.

It was the 32nd Jagadguru of Sringeri Sharada Peetam, Sri Nrusimha Bharathi VIII (1817-1879) that first recognized the greatness of Sadashiva Brahmendra and arranged for the upkeep and maintenance of his Samadhi.

His successor Sri Sacchidananda Shivabhinava Nrsimha Bharathi (1879-1912) made a seminal visit to the samadhi of the saint at Nerur. He became an ardent admirer and devotee of Sadashiva Brahmendra in whose praise he composed two poetic works (Sadashivendra Stava  and Sadashivendra Panchrathna stotram) .

[The Adhyatma Prakashana Karyalaya, Holenarasipur, Hasan District, Karnataka, has published in Kannada the texts and translation along with explanatory notes of Atmavidya Vilasa and Sadashivendra Stuthi]

He considered Sadashiva Brahmendra his ideal, tried to emulate his principles. He modeled his attitude, his ideals and his way of living in the light of Atma_vidya_vilasa. He gradually withdrew from the active administration of the Mutt starting from the year 1901and devoted increasingly to spiritual practices. Listening to Atma_vidya_vilasa and contemplating on it became a part of his daily spiritual exercise. He in his last days lived like an Avadhuta. He instructed his disciples that in the last moments of his life while he would be drawing his last breaths they should recite aloud the verses from the Atma_vidya_vilasa. He wished to die with those verses ringing in his ears. Such was his devotion to that text.

But the one who really emulated Sadashiva Brahmendra and evolved into an Avadhuta was the 34th Jagadguru  Sri Chandrasekhar Bharathi Swami. He studied Atma_vidya_vilasa intensely, imbibed its principles and truly lived according to that in word and deed .Unmindful of the external world he roamed wildly the hills of Srngeri like a child , an intoxicated , an insane and as one possessed singing aloud the verses from Atma_vidya_vilasa:

Discard the bondages of karma. Wander in the hills immersed in the bliss of the Self -unmindful of the world like a deaf and a blind (AVV-15)

He sees nothing, hears nothing, and says nothing. He is immersed in Brahman and in that intoxication is motionless.(AVV-44)

Sri Chandrasekhar Bharathi was the living epitome of the Atma_vidya_vilasa.  He was an Avadhuta – a liberated soul, one who “passed away from” or “shaken off” all worldly attachments and cares, and has realized his identity with Self. He was an enlightened being who lived in a state beyond body-consciousness.

Avadhuta (he who has shed everything) is a radical type of renouncer of an unconventional type. Avadhuta is one who has risen above bodily consciousness, duality and worldly concerns. He has no use for social etiquette. He is not bound by sanyasi dharma either. He roams the earth freely like a child, like an intoxicated or like one possessed. He is pure consciousness embodied.

The Avadhuta alone, pure in evenness of feeling, Abides happy in an empty dwelling place,

Having renounced all, he moves about naked .He perceives the Absolute, the All, within himself.

The Avadhuta never knows any mantra in Vedic metre or any Tantra.

This is the supreme utterance of the Avadhuta, purified by meditation

And merged in the sameness of the Supreme Being.

Ashtavakra Gita describes him in a similar manner:

17.15
The sage sees no difference / Between happiness and misery,/ Man and woman,/ Adversity and success. / Everything is seen to be the same.

17.16
In the sage there is neither / Violence nor mercy, /Arrogance nor humility, / Anxiety nor wonder. /  His worldly life is exhausted. / He has transcended his role as a person

17.18
The sage is not conflicted /  By states of stillness and thought. /  His mind is empty. / His home is the Absolute.

18.10
The yogi who finds stillness /   is neither distracted nor focused. /   He knows neither pleasure nor pain. /   Ignorance dispelled, / He is free of knowing.

Not all Sanyasis are Avadhutas and not all Avadhutas are Sanyasis. Of the four types of Avadhutas, Shaiv-avadhuta and Brahma-avadhuta need not be sanyasis they could even be householders. The Dashanami_avadhutas (those that bear names such as Vana, Aranya, Giri, Thirtha, Bharathi etc.) and Bhaktha_vadutas are the other two.

Of these, the Shaivadhutas and the Brahmavadutas indulge in Tantric practices.

The Bhaktavadutas form the prominent group. It consists Paramahamsa (fully realized) and Parivrajaka (incomplete, wandering) classes. The former is considered incarnation of Shiva. He could be a sanyasi or a householder; he could wear clothes or could be naked. He is not bound by any restrictions. He has no fixed place of stay. Practices like meditation, rituals, worship etc. are irrelevant to him. He is beyond conflicts of pain and pleasure, gain or loss, joy or sorrow. He is ever immersed in bliss of Self-realization. 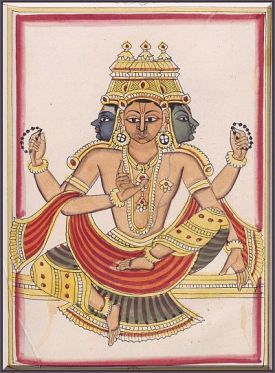 Dattatreya is the supreme Avadhuta. There is a belief that Dattatreya composed the Avadhuta Gita, which describes the characteristics of an Avadhuta.

Nath Sampradaya is a sect of Avadhutas that places great importance on the Guru and on Yoga.Avadhuta Gita is its text and Sri Ghorakhnath is its prime Avadhutha.

The worship of  Datta is more prevalent in Maharashtra and North Karnataka. The Datta kshetras such as Ganagapur, Agadi and Baba Budan Giri in Karnataka are prominent centers of Datta worship.

Posted by sreenivasaraos on September 1, 2012 in Indian Philosophy, Vedanta

← Kavi, Rishi and the Poet
A theory of Creation →