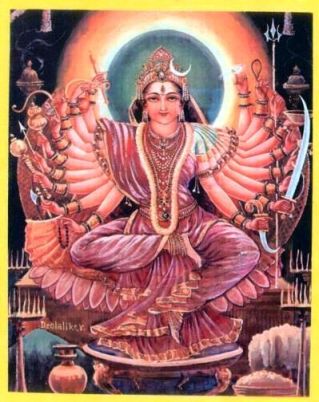 Sharan Navaratri is one of most important festivals when the Mother Goddess is worshipped as Maha- Kali, Mahalakshmi and Maha-Sarasvathi.

1.1. Mahalakshimi is generally regarded and worshipped as consort of Vishnu and the bestower of fortunes. However in the Shaktha tradition, Mahalakshmi is an independent Supreme Divinity manifesting herself as Maha-Sarasvathi (Sattva), Mahalakshmi (Rajas) and as Maha-Kali (Tamas). Here, She is not the Vishnu Patni ; but, is the Devi the Supreme Mother Goddess. She is the culmination of all Divine Forces. 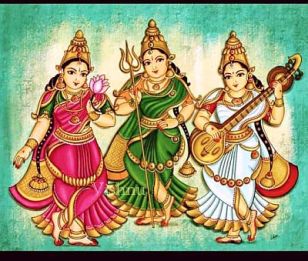 1.2. Durga-Saptha-Shathi, explains Mahalakshmi as Devi in her universal form as Shakthi. She is the primordial energy and was the first to appear before everything (sarva-sadhya) ; She is both devoid of form (nirakara) and filled with forms (sakara) ;   She is both manifest and un-manifest; She is the essence of all things (sarva sattva mayi). She creates and governs all existence (Isvari), and is known by various names (nana-abhidana-brut) . She is the ultimate goal of yoga.  Mahalakshmi is the creator of the Trinity: Brahma, Vishnu and Rudra.

Supreme Divinity as a Mother 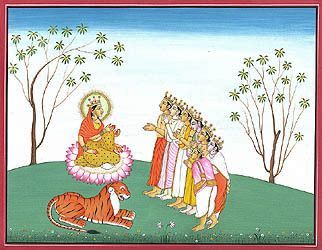 2.1. The concept of the Supreme Divinity as a woman, a mother or a womb does not seem to have a place in the Vedas. But the traces of pre -Vedic cults of the Mother Goddess can be found , latent and  ready to spring forth. The notion of Shakthi as the Supreme power seems to appear fully in the Svetasvatara Upanishad. Generally, Shakthi is another name for the manifesting power, the creative power. The Devi Suktha of Rig Veda (RV 10.125) describes her as the Supreme all-pervading Divinity.  She takes the place of Brahma and the Cosmic Embryo (Hiranyagharbha) . In the later Puranas, the Goddess is celebrated by hundreds of names. She represents the Supreme, yet within the reach of the worshipper.

2.2. Among the Shakthas who worship Mother Goddess, the source of existence is female. God is woman; the principle representation of Divinity. The Goddess is the source of all; she is the creator of Universe (Vishwa Matha).  Being the creative power through which creation arises, through which the gods are born and procreate, Shakthi is pictured as female. The notion of her divinity rests upon this power, as it explains the appearance of the perceptible universe from out of an inaccessible, motionless substratum.

2.3. The texts also mention that Shakthi the all pervading Energy is the law that governs the nature; and, to see this Energy as male or a female depends merely upon the inclination of the worshipper.

Goddess as three aspects of existence

3.1. The Goddess is the power of manifestation of three tendencies (Guna); and She appears as three aspects of existence as Sat Chit Ananda the reality, consciousness and experience. Creation arises from this triple form of power.

4.2. Durga Saptha Shathi (17-23) describes, Mahalakshmi then directed Maha-Kali and Maha –Sarasvathi to create pairs according to their Gunas; and she herself created the pair – one male and the other female – of Brahma and Lakshmi. Maha- Kali created Shiva and Sarasvathi. And, Maha-Sarasvathi created Vishnu and Gauri.

“Sat, the power of Mahalakshmi enthroned on the pure lotus of knowledge took the bi-form of male and female: Brahma, Dhaata (the supporter or the giver). The female forms are Lakshmi (beauty), Sri (fortune), Kamala, Padma (her associations with the lotus).

“The Maha- Kali, the power of delight became bi-born. The male has a blue throat, red arms, fair thighs and moon as his diadem. The woman was beautiful and fair. The Male had names as Rudra, Shankara (giver of happiness), Sthanu (immobile), Kapardini (one with matted hair), and Tri-Lochana (three eyed). The female names were: Trayi Vidya (triple knowledge), Kamadhenu, Basha (speech), Akshara (letter), Swara (syllable).

“As the pair that sprang from Maha-Sarasvathi, the male was Vishnu the pervader, Krishna (dark one), Hrishikesha (Lord of the senses), Vasudeva (Indweller), and Janardhana (giver of rewards). The female names were Uma (power of night), Gauri (fair one), Sati (the faithful), Chandi (the wrathful), Sundari (the beautiful), Subhaga (the all auspicious), Shiva (of sleep).”

4.3. Durga Saptha Shathi says, Mahalakshmi thereupon gave Sarasvathi as consort to Brahma; Gauri as consort to Rudra (Shiva) and Lakshmi to Vishnu (Vasudeva). Brahma with help from Sarasvathi created the primordial egg (anda); and Shiva with help from Gauri broke it open. Then the entire universe came out of it. Vishnu with the help of Lakshmi nourished it and protected it. Shiva with the help of Gauri undertook to dissolve it at the end.

4.4. In the Mahalakshmi Ashtaka, Indra hails the Supreme Mother as the one without a beginning or an end, the primeval energy, the greatest ruler, born of Yoga. She is gross and subtle, most terrible, the embodiment of great power and prosperity and the remover of all sins. She is the ultimate goal of yoga. 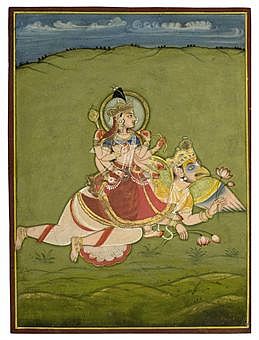 4.5. Thus, Mahalakshmi is the primordial energy manifesting as Maha-Sarasvathi (Sattva) , Mahalakshmi (Rajas) and Maha-Kali (Tamas) from whom the trinity Brahma, Vishnu and Rudra took shape to create , preserve and dissolve the universe.

5.1. Mahalakshmi is the presiding Goddess of the Middle episode (Chapters 2-4) of Devi Mahathmyam.   In her manifestation as Mahalakshmi, the Devi destroys the demon Mahishasura. The Goddess fought the demon for nine days starting from prathipath (the first day of the brighter half) of the month of Ashvayuja; and killed the demon on the tenth day Vijaya-Dashami ending his reign of evil and terror. Her victory symbolizes the victory of good over evil.

5.2. Mahalakshmi is described as having been created by the effulgence of all the gods. The Goddess wearing string of beads and killing the demon is depicted as Ashta Dasa Bhuja Mahalakshmi, with eighteen arms, holding battle axe, maze, arrow, thunderbolt, lotus, bow, water-pot, cudgel, lance, sword, shield, conch, bell, wine-cup, trident, noose and the discus sudarsana.

6.1. Vishvakarma sastra, a shilpa text, asserts that the shrine at Kolhapur (Karavira-kshetra) – Maharashtra- is one of the few celebrated centres, a Shakthi peetha, where the goddess of power Mahalakshmi is worshipped as the Supreme Divine principle; whereas in most other temples she is worshipped only as Lakshmi the consort of Vishnu. 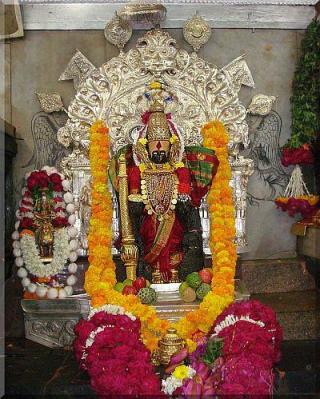 6.3. Those that have seen closely the image of Mahalakshmi in the sanctum of the temple at Kolhapur, say that the iconographic forms of the image do not suggest Lakshmi; they would suggest the form of Durga or Mahishamardhini. The image of about three feet height in standing posture (sthanaka) is carved out of black stone, with a crouching lion at the back showing its head to the left to the goddess. The idol has four hands; with her normal right hand holding the sacred maatulunga (a citrus) fruit (Sri Phalam adha-kare); the normal left hand carrying a bowl (vama- adhah kare paatram); the upper right hand holding a heavy mace with its head touching the ground (urdhve kaumodakim); and, the upper left hand holding a shield (vama-urdhve- khetakam).Her crown is adorned by the hood of a serpent.

7.1. The Durga Saptha Shathi and Skanda Purana (Sahyadri khanda) provide iconographic details of Mahalakshmi to be depicted with eighteen hands.

“She who springs from the body of all gods has a thousand or indeed countless arms, although her image is shown with eighteen hands. Her face is white made from the light streaming from the face of Shiva. Her arms are made of substance of Vishnu are deep blue; her round breasts made of Soma are white. Her waist is Indra and is red. Her feet sprung from Brahma are also red; while her calves’ and thigh sprung from Varuna are blue. She wears a gaily coloured lower garment, brilliant garlands and a veil. Starting from the lower left: she holds in her hands a rosary, a lotus, an arrow, a sword, a hatchet, a club, a discus, an axe, a trident, a conch, a bell, , a noose, a sphere, a stick, a hide, a bow, a chalice and a water pot.”

Chandi Kalpa provides the almost the same details but adds that Mahalakshmi should be seated upon a lotus (saroja sthitha) and her complexion must be that of coral (pravala prabha).

7.2. The Shilpa text Rupa-mandana suggests the details for Mahalakshmi with four arms. According to that text, Mahalakshmi should be depicted in the colour of molten-gold (taptha-kanchana-sannibha) and decorated with golden ornaments (kanchana bhushana). She is also described as having complexion of coral; and seated on a lotus. Her four hands carry matulunga fruit, mace, shield and bowl of liquor. Her head must be adorned with snake-hood and a linga.

“I am the Queen, the gatherer-up of treasures, most thoughtful, first of those who merit worship. Gods have established me … I breathe a strong breath like the wind and tempest.

I hold together all existence. Beyond this wide earth and beyond the heavens I have become so mighty in my grandeur.” The Devi Suktha – Rig Veda (RV 10.125)

The Myths and Gods of India by Alain Danielou

The pictures are taken from internet

Posted by sreenivasaraos on October 6, 2012 in Devi