Ganapathi, the lord of the ganas

1.1. Everything that our senses can perceive and our mind can apprehend can be expressed in terms of categories. These might include our desires, our treasures, and all that we care for or try to avoid.  Hence categories, the Ganas, could be considered inevitable to our existence. The texts mention, all that can be counted and comprehended is Gana.

[ It is said; such categorization or analytical  investigation and examination (ānvīkṣikī) of issues which bring clarity into the intellectual aspects of man’s life help him to attain freedom (moksha) from delusions and confusions in life. The Arthasástra of Kautilya (Chapter II-  ṣection.1: Enumeration of the sciences) speaks of ānvīkṣikī– metaphysical speculation involving keen introspection – as being the most beneficial to the world – ‘leading to all kinds of knowledge, reliable means to accomplish all kinds of acts and receptacle of all kinds of virtues’.

1.2. The term Gana means a collection of things or the horde. The fundamental principle of classification through which the relation between different orders of things; and between macro and micro forms of existence can be understood is called Ganesha the ruler over all categories. 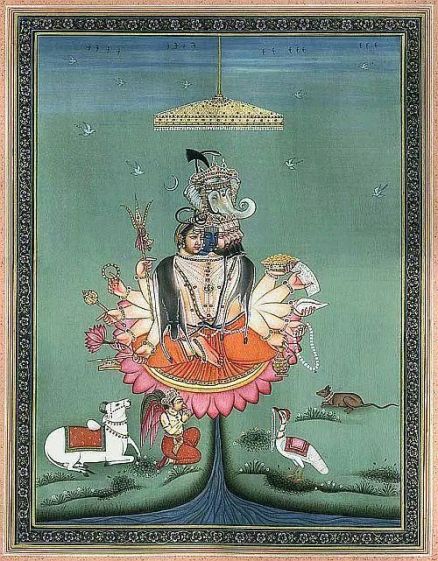 2. Ganapathi the ruler of all categories is identified with Divinity in its perceptible manifestation. For the followers of the Ganapathya sect he is the Supreme Divinity. He is placed above the Trinity (Tri murti).

3. Ganapathi stands for one of the basic symbolisms in the Indian thought, the identity of the macrocosm and the microcosm; or, in religious terms, man is in the image of God. That relation can be best expressed in terms of number (gana). Hence, number is seen as the common element of all forms.’

4. 1. Ganapathi’s elephant head over man’s body symbolizes unity of the small being (micro) and the Great Being (macro). The term Gaja that normally means elephant is at times taken to signify “the origin as also the goal” (ga = goal; ja =origin). The Gaja is thus a symbol of the stage where the “un-manifest ends “and where “existence begins”. The man part of Ganapathi image is the manifest principle; and the un-manifest is that which is above.

4.2. In the world of appearances where opposites do not often coexist, man cannot be “Gaja”; but it can happen symbolically. Ganapathi Upanishad states “thou art That (tat tvam asi) ”.The text says the living being is the visible form of That, the supreme essence. Human existence, according to that Upanishad, is the coordination of the absolute and the relative; of That and Thou. True knowledge is the realization of unity.

The image of Ganapathi is the symbol that constantly reminds us of this apparently impossible identity. One should bow to Ganesha before one begins anything.

5.1. The Ganesha principle (tattva) transcends intellect. Yet, as in the case of other Indian deities, Ganesha too is represented through various symbols; mantras the sound representations; yantras the graphic representations; and the murtis icons or images.

5.2. The monosyllable AUM uttered at the beginning of every rite is said to be the sound image or the mantra representing Ganapathi. Its import “Thou art That” is symbolized by the unity in Ganesha image of the small and the Big. 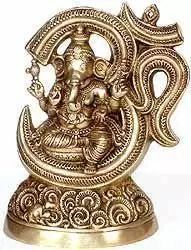 5.3. The Swastika is also said to be the graphic image of Ganesha. Its multiple arms all emanate from the common central point, Bindu. But, each arm is bent away and does not aim towards the centre. It is perhaps meant to suggest that we cannot reach the Bindu, the basic unity, directly through outward manifestations.

There is also a diagram called Ganesha yantra, used mainly for ritual worship. Ganapathi is regarded the synthesis of all the five elements. The earth element is represented by a square; the water by circle; fire by triangle; air by half-moon; and space by Bindu (point). It is said all these features can be found in the form of Ganapathi. 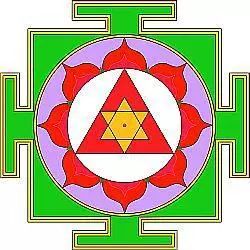 There is a close relation between Yoga and Tantra; and Ganapathi figures prominently in both the streams. He is the presiding deity of the Muladhara Chakra. It is also said; his tusk is Om-kara; his belly the great space; the serpent around his belly the Kundalini enclosing all; his rat the Rajo-guna; which Ganapathi controls riding on it.

5.4. It is said, Ganesha is obese to suggest that all manifestation is contained in him; and he is not contained. His ears are like winnowing trays, throwing away the dust of the vice and virtue, retaining only the Reality that is beyond qualities. Ganesha has one tusk, the word One is said to be the symbol of illusion (maya) from which all duality springs forth. The broken tusk is the impeller of illusion. The goad (ankusha) in his hand is for taming ignorance, while the noose (pasha) is caution against bondage.

His ride, the mouse is essentially a stealer, one who takes away things to which people are attached .The greatest attachment one can have is “I-ness”. The ride works at the behest of its master, the remover of illusions. 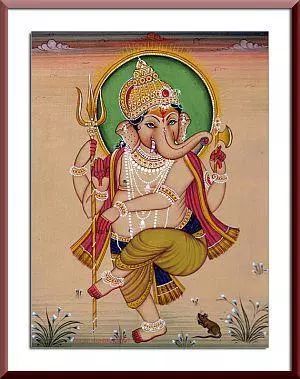 6. Ganesha is the lord of wisdom; the patron of letters and of schools; he is the king of the elders (Jyesta raja); and he is the first among the greats and presides over the assembly of gods. He is Vinayaka,  the great leader. He is the lord (Vigneshwara) and the destroyer of obstacles. He is Gananatha the lord of all categories. He rules over the universal intellect (maha tattva) and the elements (tattva) derived from it.

Siddhi the attainment and Ruddhi the prosperity are his consorts.

The pictures are from internet

[ Note on significance 21 associated with Ganapathi

The association of number twenty-one with Ganapathi has many interpretations. The most common of such explanations is  that  twenty-one is the sum of five gross elements(bhuta) + five subtle existential  principles or vital airs (pancha prana) + 5 subtle organs of perception (jnanendriya) + 5 sense-organs of action (karmendriya) + mind; suggesting that Ganesha is the Lord presiding over all the elements of existence.

The other suggestions are from Tantra, as Ganesha is basically a Tantric deity. According to Tantra, Ganesha’s ‘true-name’ (nija –naama) that is the effective name by which he is invoked is the Bija ’Gam’; his other names being the popular ones by which the people of the world love to call him (laukika). The Tantra Schools rely on an ancient system of notation which assigns numerical value to each consonant of the Sanskrit alphabet , for the purposes of inscribing on and designing various yantras as also for offering interpretations on the structures of the chakras and other graphical presentations. Of those systems, the Katapayadi which took strong roots in Kerala is considered the most authentic.  That system is also in use in the South Indian classical music.

The  Katapayadi, in a way, anticipated the hashing technique of Computer Science which derives a number from a non-numeric key for indexing into a table. For more on that, please check the following link; and, if possible, refer to the fourth section of a scholarly book: The Eastern mysteries, an encyclopedic guide to the sacred languages by David Allen Hulse.

According to Katapayadi, the Bija “Gam” has a numeric value of three (Ga =3; the Anusvara the dot and Anunasika  the dot within a crescent placed over the letter having no numeric value). Ganesha is thus associated with the number three , which sometimes is expressed as :2+1.

After having invoked Ganesha with his Bija Gam, the worshipper salutes his Lord with the chant: Ganapathaye namaha. The numerical value of that chant , according to Katapayadi  is twenty-one : ( ga =   3; Na=  5; pa =1;ta =6; ye=1; na=0; and mha =5).Please check the table  posted below.

Thus, it appears ,  is Ganesha’s  association  with numbers three and twenty-one.

This is , as I understand it; I could be wrong.]

Posted by sreenivasaraos on September 30, 2012 in Indian Philosophy, Speculation

5 responses to “Ganapathi, the lord of the ganas”