The Legacy of Chitrasutra – Four -Sittannavasal

[This is the fourth article in the series.

The present article is about the Jain murals (ninth-century) at Sittanvaasal caves in Tamil Nadu. These are perhaps the earliest surviving Jain murals

Continued from  : The Legacy of Chitrasutra – Three – Badami

12.2. Sittanavasal, near Pudukkottai in Tamilnadu is renowned primarily for its rock-cut cave temple with its rare Jaina mural paintings. The name indicates abode of the Siddha (the monk or monks).The first century Tamil-Brahmi inscription names the place as ‘ChiRu-posil’.  It records that Chirupochil Ilayar made the Atitnam (Adhittana, abode or a dwelling place) for Kavuti Itan who was born at Kumuthur in Eorumi-nadu. The territorial division of Eorumi-nadu is   identified with the present-day Mysore region.

The cave floor, in fact, provides slightly elevated beds and pillows carved out of rock, for use of the monks.  There are about seventeen beds, rectangular even-spaces; each with a sort of stone pillow. It is likely that on these rock beds the Jain ascetics performed austerities such as kayotsarga and sallekhana (voluntary starvation leading to death). 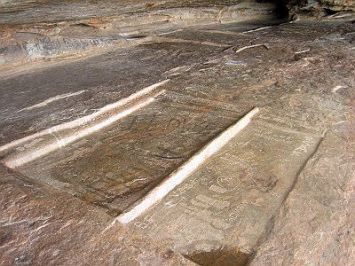 An inscription of 7th century AD,written in Tamil Brahmi, in 7 lines, mentions some names (perhaps of Jain monk residents):

[There is mention of another inscription written in vattelettu script dated 5th – 6th centuries AD, found in another natural cavern in the same hill.]

[Sittannavasal has the distinction of being the only monument where one can find, in one place, Tamil inscriptions dating back from 1st century BC to the 10th century AD. It is virtually a stone library in time].

It is likely that the Sittannavasal cave temple dated around first or second  century (based on the Tamil-Brahmi inscription found on the cave floor) belonged to a period when Jainism flourished in Southern India. And, it  served as a shelter for Jain monks till about 8th century when Jainism began to fade away in the Tamil region.

12.3. Sittannavasal, a natural cave, located on top of a modest granite hill, called Eladipattam, served in the ancient times, as residence for the Jain monks. The cave temple is quite spacious and has a low roof. But, Sittannavasal is rather small in size in comparison to Ajanta with which its paintings are often compared.

13.1. The importance accorded to Sittanavasal is not because of its size or grandeur, but because of its significance in the history of development of Indian art and also because of its exquisite style of depiction, as evidenced by the fragments of its remnant murals. The Sittanavasal paintings are regarded as a surviving link between the Ajanta paintings (c.6th century) and the Chola paintings of Thanjavur (11th century). They are also classified with the Sigiriya (Srigiri) frescoes of Sri Lanka (fifth century) and the Bagh frescoes in Madhya Pradesh (sixth and seventh centuries).

13.2. Sittanavasal is the earliest example of Jaina paintings. These paintings gathered attention of western world after an inscription was published during the year 1904.Though the cave and its interior carvings are dated to around 2nd century, the surviving remnants of the beautiful paintings on the ceiling of the sanctum and the ardha-mantapa (front pavilion) are dated around seventh century, as they appear to be based in the classical Ajanta style. Some scholars say, the pillars and cave paintings belong to the period of the  Pallava king Mahendra-varmanI (580-630 CE).

13.3. Another reason for dating the Sittannavasal murals around 6th -7th century is that they exhibit some Pallava features. Further, the temple in its architectural style resembles the cave temples built by the Pallava king, Mahendra-varman.

As regards the wall-surface and its preparation, they closely resemble that of Ajanta. The base of Sittannavasal paintings is well consolidated, firm yet thin with lime plaster used as binding agent. The painted plaster is made up of three layers: rough plaster, fine plaster and a covering layer of paint, as in Ajanta.

I understand, these remnants too are eroding fast clouded by the fine granite dust emanating from the nearby quarries. And, this ongoing disaster might eventually emaciate the rock-hill, weaken the ancient temple structure and bring the whole of it crumbling down.

14.3. Among the pictures painted on the pillars, the figures of the dancers adorned with ornaments and distinctive hair styles; and displaying graceful dance postures are very attractive. They closely resemble the Apsaras (celestial maidens) of the Ajanta.

There are two dancers painted on western face of the two pillars, greeting those who enter the cave. However, the images are much weathered now; and, only upper the portions of the dancers remain. Apsara’s hair is tied together and is adorned with varieties of flowers. She wears necklaces around her neck. Her upper body is bare (as in the classical style of depicting the aristocracy) . It is likely that the full figure was depicted   with elaborate clothes below her waist.

14.4. A painting on the southern pillar of perhaps the king and his queen has somehow survived. The benign looking male figure is adorned with an elaborate crown, ear-rings set in gems (patra-kundala and makara kundala). The female figure behind him is rather simple.

14.5. Canopies of vivid patterns are painted on the ceiling over the images of Thirthankara Parshvanatha a Jain Acharya (preceptor) employing the lotus motif.

15.1. The most important mural of Sittannavasal is the exquisite composition depicting the delightful Jain heaven. The painting depicts Sama-vasaranathe adorable heavenly pavilion with theBhvyas, the eligible souls fortunate to receive divine discourse in the Samava-sarana.

The termSamavasarana (Sama + avasarana) means an assembly which provides equal opportunities for all who gather there. Samavasarana, in Jain literature denotes an assembly of Thirthankara.  At this assembly different beings – humans, animals and gods – are also present to behold the Thirthankara and hear his discourses. The common assembly, at which different beings are gathered for one purpose, treats all alike overriding the differences that might exist among them. A  Samavasarana is thus, a tirth, a revered place.

According to Jaina faith, the Bhavyas have to pass through seven bhumis or regions before they gain eligibility to listen to the divine discourse. Among these bhumis, the second bhumi is the khatika-bhumi (region-of-the-tank).

The Sittannavasal mural depicts the joyous scenes at this divine lotus tank.  It pictures bhavyas amusing themselves in the delightful lotus tank full of lotus flowers, fishes, birds and animals.

It is a picture of sublime happiness, where the Bhavyas happily gather, with tender care, lotus flowers larger than themselves, while elephants appear to smile; and the bulls, birds and fishes are in playful mood. The figure of the bhavya is made with a lilting grace, like the stalks of the lotuses he gathers. It is a gracious world.

15.2. The lotus with their stalks and leaves, and the birds, fishes, bulls and elephants are utterly simple and beautiful in their natural charm. Some art critiques have remarked, this might be one of the most beautiful depictions of flowers in ancient Indian art.

These flowers attract viewer’s attention due to their sheer size and bright colours. This bright colour fades gradually towards inside of flower. These flowers are depicted in various stages of development, from a bud to a well blown flower. The bright red lotus with green leaves and thin stem presents a very pleasant sight.

There are three buffalos in this lake, one totally submerged and two in state of getting out of the lake as men approach. There are three men in the lake who are shown collecting flowers. Elephants are shown carrying lotus stems and in process of handing those to nearby men. One of them is holding a basket to place flowers into it. These men probably represent Jaina monks who are getting flowers for offerings to their teachers. Smile on their faces suggest that they are happy and content.

15.2. The unique features of the Indian art are seen here, where humans share the joy of life with the animals, birds and plants. It is a celebration of life, even in after-life. It echoes the spirit of life immortalized in an inscription at Ajanta: “The joy of giving filled him so much that it left no space for the feeling of pain.”

It seemed to convey “Every leaf, every flower, every ant, deer, elephant and human form is filled with the same joyous spirit that flows through and connects all that there is in the world”.

Please see reproductions of some of the ancient paintings of Sittanvasal 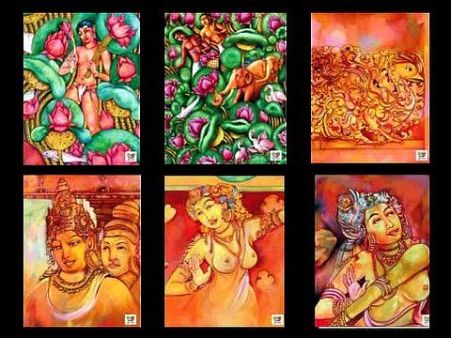 The Panamalai temple of the Pallava times

Posted by sreenivasaraos on September 22, 2012 in Art, Chitrasutra, Indian Painting, Legacy of Chitrasutra

14 responses to “The Legacy of Chitrasutra – Four -Sittannavasal”