The Three Women In Mahabharata (1 Of 3 )- Sathyavathi

The men play dice and wage wars in Mahabharata , as anywhere else ; but it is the women who wield power and influence. It is the women who take decisions , direct the course of events and decide the fate of men and their generations to follow. The women are the true leaders of the Epic The three women in particular who wielded power in more than one form were Sathyavathi the dusky fragrant fisher girl who became the queen , Pritha the fair maiden who reluctantly became the mother of five sons and Krishnaa , daughter of the fire , Druapadi. The Epic is interwoven with their remarkable sagacity in exercise of their power and leadership. Some say the Epic, in a way , is a study in use and abuse of power.

These women displayed that the truly powerful do not cling to power. They know when and how to wield it ; but , even more importantly, when not to use it.

Satyavathi in her relentless drive to accomplish ; and more importantly, to retain power, manipulated the lives of persons around her. She tried her hardest. Most of her schemes did not turn out well. Towards the end of her life , she was angry , sad and disillusioned . But, what was worse was that her progenies were left to suffer the wrath of her greed . They reaped a bitter harvest.

As Kali, the dusky nubile fisher-girl smelling of fish, was transformed into musk fragrant Satyavathi , she took Hasthinapur by storm. The queen to-be , she insisted her blood alone be heir to the throne of Hasthinapur. With that , she caused the prince Devavrata to turn into Bishma , who then locked himself in the shell of his self-imposed vows;  lost the sensation of being alive; and, distanced himself from life; and  yet he chose to cling on to mere existence.

Her aged husband died leaving her with two sons. Both her sons later died in their youth without producing an heir to the throne. The elder one died valiantly waging a lone battle; and , the other was too young and consumptive. The younger son too died in his youth of poor health and overindulgence:  sarvāsām eva nārīṇāṃ citta-pramathano ‘bhavat /  tābhyāṃ saha samāḥ sapta viharan pṛthivīpatiḥ (MBh 01,096.056-57 )

The dead prince had produced no heir to the throne.

Satyavati then tried to entice her stepson Bhishma by offering to release him from his vow of celibacy; and, asked him to marry the widows of his half-brother and produce sons. A piqued Bishma however sternly refused to oblige her “Let doom overtake the world ! Immortality cannot tempt me, nor lordship of the three worlds .. ! I will not break the vow.”

She was unwilling to accept defeat. She did not want it said that it was because of her , the great line of the Bharatas came to an end. Hungry for grandsons, desperate to propagate her lineage , Sathyavathi summoned Vyasa, born to her by Parasara , out of wedlock; and, ordered him to produce sons from his half-brother’s widows through Niyoga *.

[*an accepted ancient  practice, in which a woman (whose husband is either incapable of fatherhood or has died without fathering a child) could request and appoint a man for helping her bear a child , in order to continue the dynasty.]

Vyasa an ascetic , who never lived in the family of his mother’s husband, shocked , refused to obey his mother’s orders. He even counseled his mother that preserving the dynasty by adopting such heinous means was improper (VI.24.46-48).

Satyavati desperately argued that the directives of elders, though apparently improper , ought to be obeyed ; and, such compliance attracted no blame, particularly as it would remove the sorrow of a grieving mother.

It was when Bhishma stepped in and urged Vyasa to obey his mother that he gave in reluctantly; and, agreed to engage in what he described as “this disgusting task” (VI.24.56).

Vyasa wondered whether such progeny born of out of wedlock “vyabhicharodbhava “ VI.25.28) could ever be a source of happiness for him. How prophetic were his words…!

Vyasa asked his mother that the widows be on a year-long vow and austerity so that they purified themselves of the lust they were tainted with through seven years of over indulgence Satyavathi was in a hurry for a heir ; and, was in no mood to wait. She ordered Vyasa to be done with his task at the earliest. 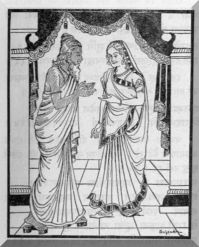 The helpless Vyasa gave in to his mother’s demands; and said – ‘If I am to give unto my brother children so unseasonably, then let the ladies bear my ugliness. That in itself shall, in their case, be the austerest of penances. If the princess of Kosala can bear my strong odor, my ugly and grim visage, my attire and body, she shall then conceive an excellent child.'(Sambhava Parva; Section CV)

Satyavati then went to her daughter-in-law and seeing her in private spoke to her these words of beneficial and virtuous import, ‘O princess of Kosala, listen to what I say. It is consistent with virtue. The dynasty of the Bharatas hath become extinct from my misfortune. Beholding my affliction and the extinction of his paternal line, the wise Bhishma, impelled also by the desire of perpetuating our race, hath made me a suggestion, which suggestion, however, for its accomplishment is dependent on thee. Accomplish it, O daughter, and restore the lost line of the Bharatas. O thou of fair hips, bring thou forth a child equal in splendor unto the chief of the celestials. He shall bear the onerous burden of this our hereditary kingdom.’

Thus, Satyavathi, in a way,   tricked and manipulated her widowed daughters-in-law into believing that the young Bhishma would be coming to them.

Thereafter, splendidly decked, and having bathed on the fourth day after the monthly cleansing, the eldest first awaits the appointed father of her future child.

When suddenly Vyasa barged into the bedroom with his flowing red locks, ash covered dark body and fiercely glowing eyes , they were totally unprepared ; and were  aghast and shocked beyond belief . It was in that state one woman closed her eyes in fright ; and, the other went pale in horror.(Section CVI)

The result was that one had a son born blind and manipulative ; the other had a son pale and near-impotent , hankering for sex.

Even then Satyavathi had learned nothing. She wanted healthy grandsons at any cost. Yet, again she talked Ambika into having sex with Vyasa. Ambika , had not overcome her fright of Vyasa , yet. She therefore deceived Satyavathi ; and, this time sent in her maid instead, who without fear and aversion accepted the sage. Their child was the virtuous Vidura, possibly the sole true grandson of Satyavati. She arranged to educate him along with his half-brothers . She assigned Vidura to assist and guide the blind Dritharastra.

Vidura, too, however, died childless. Satyavathi’s other grandson, Pandu died just as his putative father Vicitravirya, without having been able to father progeny.

After her grandson Pandu’s death, Satyavati realized how in vain were her efforts ; and, meekly obeyed her son Vyasa when he advised her not to be a witness to the suicide of her race. “The green years of the earth are gone. . . . . Do not be a witness to the suicide of your own race.” Vyasa asked her to leave the court and retire to the forest with her daughters-in-law. She accepted Vyasa’s advice and retired gracefully to the forest, unlike the obsessed Bhishma who chose to linger on aimlessly.

To an extent, Satyavati succeeded in using her manipulative power and accomplishing what she desired . But that did not take her far; as she had not learnt when not to use power. She had also not learnt to value reason and intuition.

In her progeny-hungry lifetime, driven mainly by an obsessive desire to retain power, Satyavati saw her husband, her two sons and one grandson die; the eldest grandson born blind; the youngest one not qualified to be king, being base-born, despite being the only fully healthy and virtuous issue. The middle one dared death for sex and succumbed. “Passion overpowered him , it seemed that he wanted to commit suicide, as it were. First he lost his sense, Then, clouded by lust, he sought the loss of his life “. (Adi parva, 01,116.007- 011 )

.. the monarch, overpowered by passion, forcibly sought the embraces of Madri, as if he wished to put an end to his own life. His reason, thus beguiled by the great Destroyer himself by intoxicating his senses, was itself lost with his life. And the Kuru king Pandu, of virtuous soul, thus succumbed to the inevitable influence of Time, while united in intercourse with his wife – MBh. Adi Parva-Section 125 – Sambhava Parva continued – Translation of  Sri Kesri Mohan Ganguly

Thereafter the question of succession to the throne , with which Satyavathi was so obsessed all her life, took a crooked path; and, it eventually led to internecine bloodbath. 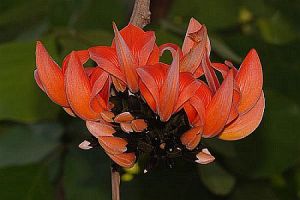 Posted by sreenivasaraos on September 7, 2012 in Mahabharata