Among the followers of the Buddha there were many lay disciples , the householders, who excelled in the understanding of the Dhamma and in preaching the Dhamma . The foremost among them was Citta .He was the model that the Buddha urged others to emulate .He was the foremost disciple in expounding the Dhamma.On one occasion, the Buddha said to the monks: “Should a devoted mother wish to encourage her beloved only son in a proper way she should say to him: ‘Try to become like the disciple Citta “

A wealthy merchant who owned the hamlet of Macchikāsanda near the city of Savatthi celebrated the birth of a son by covering the village streets with flowers of various hues. The streets at once looked colorful and picturesque . The baby boy was hence promptly named Cittagahapati . His family and friends called him , for short , Citta . Because of his birth in Macchikāsanda , he also acquired the name Macchikásandika. The boy grew up to be a bright and an articulate young man . Besides his family trade Citta acted as the Treasurer of the City Council of Savatthi, where he now lived. He also owned a tributary village called Migapattaka . He had a resort in the grove Ambarukkhavana, in his native village of Macchikāsanda .

Once when the monk the Elder Mahānāma visited Macchikāsanda, Citta, pleased with his demeanor, invited him , for a meal at the Ambarukkhavana grove .Citta was so impressed with the discourse delivered by the monk that at its conclusion he dedicated the Ambarukkhavana grove to the Sangha . Later he built a splendid monastery there for the use of monks . The monastery came to be celebrated as the Ambātakārāma; and was the residence of a large numbers of monks . Discussions often took place there between Cittagahapati and the resident Bhikkhus . Among eminent Elders who visited the Ambātakārāma were Isidatta of Avanti , Mahaka of magical powers ,Kāmabhū ,Godatta and the Elder Lakuntaka Bhaddiya who lived there in solitude and in meditation . A monk named Sudhamma was another permanent resident of the Ambātakārāma .

Citta , by diligence and dedication , not only grasped the heart of the Dhamma but also became quite an adept in explaining the Dhamma. The Buddha considered Citta the most learned and lucid of all the lay Dharma teachers. The Buddha recognized Citta as the foremost in expounding the Dhamma .He held up Citta as a model for others to follow. The Tipitaka contains discourses preached to and by Citta . The sixty-first section in Tipitaka , Citta Samyutta Nikáya is named after him and contains a record of his discussions . In the Samyutta Nikaya there are two sutras wherein he discussed Dhamma with the monks. They indicate his profound grasp of the subtle aspects of the Dhamma.

On another occasion, the monk Kamabhu, perplexed by one of the Buddha’s sayings, asked Citta if he could explain what it meant. The saying was:

Pure-limbed, white-canopied, one-wheeled,
The chariot rolls on.
Look at he who is coming,
He is a faultless stream-cutter, he is boundless.

Citta explained the verse with understanding and insight. He said: “‘Pure-limbed’ means virtue, ‘white-canopied’ means freedom, ‘one wheeled’ means mindfulness, ‘rolls on’ means coming and going. ‘Chariot’ means the body, ‘he who is coming’ means the enlightened one, ‘stream’ means craving, ‘faultless’, ‘stream-cutter’ and ‘boundless’ all mean one who has destroyed the defilements.” Citta’s ability to give a spiritual interpretation to what appeared to be merely a beautiful verse surprised and delighted Kamabhu .

The laymen and Bhikkhus respected Citta as a great teacher. Citta used his knowledge to help both believers and non-believers.

It appears that Citta did not formally join the Order though he had encouraged many of his friends to do so. That might have been because of his certain commitments in his personal life as a householder.

Citta’s visit to the Buddha at the Jetavana monastery is recorded in the Canon. It is said , Citta loaded five hundred carts with food and other offerings for the Buddha and his disciples visited Savatthi, accompanied by three thousand followers. They traveled at the rate of one yojana a day and reached Savatthi at the end of a month. Then Citta went ahead with five hundred of his companions to the Jetavana monastery and fell at the feet of the Buddha. Citta stayed at the monastery for one whole month offering alms-food to the Buddha and the bhikkhus ; and also feeding his own party of three thousand. All this time, his stock of food and other offerings. were being replenished. The Buddha preached to him the Salāyatana-vibhatti.

The Salāyatana-vibhatti Sutta is a series of definitions of the

On the eve of his return journey, Citta put all the things he had brought with him in the rooms of the monastery as offerings to the Buddha .The Buddha said, “Ananda, this disciple is fully endowed with faith and generosity; he is also virtuous and his reputation spreads far and wide. Such a one is sure to be revered and showered with riches wherever he goes.”

Then the Buddha spoke in verse as follows:

He who is full of faith and virtue, who also possesses fame and fortune, is held in reverence wherever he goes.

The Dhammapada Atthakatha says that once Citta made offerings to some monks and one of the monks was rather rude. He was therefore rebuked by Citta . The monk complained to the Buddha against Citta but Buddha rebuked him and asked him to apologize to Citta (the monk became an arahant eventually).

The Buddha uttered the following Verses to the monks :

The fool will desire undue reputation, precedence among monks,
authority in the monasteries, honor among families.

Let both laymen and monks think, “by myself was this done;
in every work, great or small, let them refer to me.”
Such is the ambition of the fool; his desires and pride increase.

When Citta lay ill just before his death, he did not wish for heaven because he did not aspire to anything so impermanent. True to his calling he gave his last advice to those gathered around his death bed. Citta requested them to have trust and confidence in the Buddha and the Dhamma ; and to remain unswervingly generous to the Sangha.

Citta was an ideal lay disciple , an ideal preacher and an ideal son.

“Should a devoted mother wish to encourage her beloved only son in a proper way she should say to him: 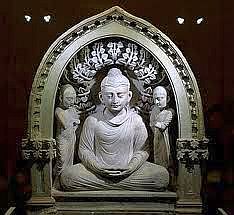 Posted by sreenivasaraos on September 6, 2012 in Buddha, Buddhism

5 responses to “Citta the preacher”