RSS
← Time and the Individual
Good friends are like stars… → 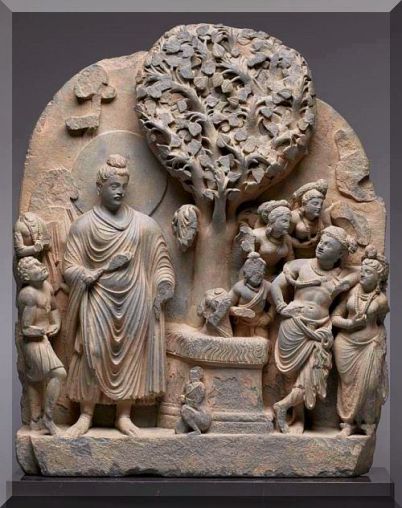 The interaction between Hellenistic Greece and Buddhism started with Alexander’s expedition into during 334 BCE. Following Alexander’s death in 323 BCE his empire fragmented with each of his generals assuming charge of a portion of the empire. In the process, Seleucus became the king of the land that stretched into India. In the succeeding periods, spread over three hundred years, this kingdom again split into smaller ones. However, Buddhism flourished all along under these Indo-Greek kings. The friendly relations between Greek and Buddhist cultures continued until about 5th century.

During these long years, just as Buddhism spread its influence in the Hellenistic world particularly around Alexandria , the Greek culture in turn exerted its influence on Buddhism.

Some scholars opine that Greek-Buddhist interaction lead to evolution of Mahayana branch of Buddhism, introducing the “man-god” treatment of the Buddha as is done with Hellenic gods. Further, the representation of Buddha in human form also appeared to be an offshoot of Hellenic influence on Buddhism.

Until around the first century, the Buddha was represented by a pair of footprints .The human image of the Buddha was not projected either in sculptures or in paintings. It was only after the advent of Ghandhara art (of Greco-Roman origin that flourished largely during the Kushan dynasty) the image of the Buddha as we know today took shape. Those artists, while retaining their classical conceptions of the human form presented to the world a Greek-featured Buddha, dressed in a toga and seated in yoga pose. Thus, the Gandharan style represented a union of classical Indian and Hellenic elements

Apart from this ,while interpreting the Buddhist legends (Jathaka tales), the Gandhara School incorporated many motifs and techniques from classical Roman art, including vine scrolls, cherubs bearing garlands, tritons, and centaurs. The Gandhar craftsmen thus made a significant contribution to Buddhist art in their depiction of events in Buddha’s life. The basic iconography, however, remained Indian

Albert Gruenwedel (1856 -1935), a German Indologist, thought that Hellenic deities were traceable in Ghandara art. According to him, Apollo served as the model for Buddha images. The Gandhara school , he said , drew upon the anthropomorphic traditions of Roman religion and represented the Buddha with a youthful Apollo-like face, dressed in garments resembling those seen on Roman imperial statues .He also remarked that the types of Ghandara school were traceable in Buddhist religious paintings of Tibet , China and Japan. 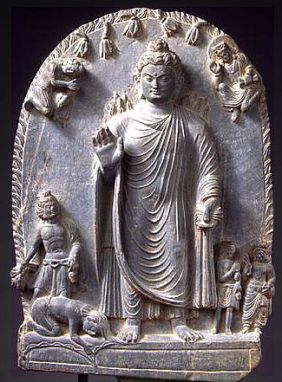 [ There is a counter point to this argument.

Ananda K. Coomaraswamy (1877–1947) in his relentless search for the non-derivative or ‘original’ nature of Indian art is typified in the debate on the Indian origin of the Buddha image, where he also establishes its development from early Indian yakña prototypes, as a counterpoint to Foucher’s thesis that accorded an exclusive Gandharan (and hence Greco-Roman) derivation to the Buddha image .

There is interesting similarity here, though not directly related to the Buddha subject. Until Christianity took root in Greece , there was no representation of Christ in human form. The early Christian scrolls etc. indicated Christ with the figure of a fish. Some scholars (LaTourette 1975: 572) consider the mage of Christ Pantocrator (“Christ, Ruler of All”) is modeled after the great statue of Zeus enthroned at Olympia and it remains a central icon of the Eastern Orthodox Church.

Posted by sreenivasaraos on August 31, 2012 in Buddhism, History

← Time and the Individual
Good friends are like stars… →

4 responses to “Hellenic influence on Buddhism”